In Bach and the Meaning of Counterpoint, David Yearsley recounts the incredible tale of Pierre Demoulin’s automata. The three automatons – a flutist, a drummer and a duck(!) – were unveiled to astonished Frankfurters in 1746, who were fascinated – and in some cases, deeply troubled – by their realism and functionality (the duck’s most acclaimed feature was its apparent digestive system). The flutist, however, captured the imaginations of the German intelligentsia – especially the great flute virtuoso Joachim Quantz – with its astonishing technical ability. Yearsley, quoting Quantz, writes: “With skill a musical machine could be constructed that would play certain pieces with a quickness and exactitude so remarkable that no human being could equal it….but it would never move you.” 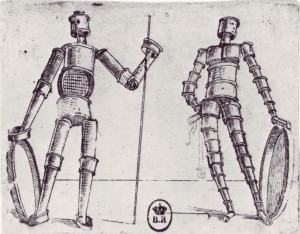 Quantz’s musical prophecy was fulfilled just over two centuries later with the development of computer music in the 1940s and 1950s. With the possibility of a perfect, impossibly accurate realization of a given work, performers were now cast as an imperfect shadow of now quite visible Platonic form of technical virtuosity. In this new reality, musicians bore a new burden – they were now subject to the autocratic rule of technical perfection, machine-like accuracy.

Automaton is a dramatization of this burden – a kind of passion play for the contemporary musician in which heartless, unrelenting machines roar, then slowly crumble as a distinctly human voice emerges from the ruins. The opening measures of the work are a theatre of impossibility: is the clarinetist breathing? can any other sound be heard above the loud mechanical percussion of the bass clarinet’s large and cumbersome keys? And in the end: is that the sound of a human voice, or just a convincing reproduction?